Here are Obama and Romney from each of their versions of the completely silly Dancing Candidates cards.

At Doozcards, I think you’ll be relieved to know we don’t’ take a political stand. We try to find the humorous side of the election.  Here and there over the years, a couple of customers have accused us of favoring one side or the other, but our office actually is a mix of both parties.  We often joke that our votes cancel each other out. These days we all need a sense of humor about American politics.  In our house, we’ve been watching the debates and we had a lot of reactions.  “Why did he say that?”  “Is he really making that point?” Of course, the internet is teaming with a lot of heated opinions.  Jon Stuart, Stephen Colbert and SNL keep me laughing about this election. This SNL satire of the debates gives some good giggles. We should keep our sense of humor, especially if we want to keep all our friends right? If you want to keep your sense of humor about the election, send silly ecards from our Political Ecards page. When we made the Obama Dancing Birthday ecard and the Mitt Romney Dancing Birthday ecard, I could not stop laughing.  The costumes are so absurd, especially the Korean flag dancing one.   We have a mix of funny political ecards and some musical political ecards.  Also, if you are looking for political ecards for free we have some in our free ecards section.

Here’s a link to the hilarious SNL debate spoof:  http://www.nbc.com/saturday-night-live/video/gop-debate-cold-opening/1358180

Here at Doozy, we pride ourselves on knowing “funny.” Humor is part of our job, after all. But defining what is and isn’t funny can get pretty serious! Some comedy crosses over and reaches just about everybody while certain types of humor can easily offend other people.

Some friends and I had a lively discussion about this very topic a few nights ago over lunch. A friend said over dessert, “I saw Saturday Night Live a few nights ago and could barely get through it. There was a skit about a drunken uncle and I found it offensive and very unfunny. Drunk is never funny.”

Everyone nodded in head in agreement…except for me.

“But there’s a long history of funny people who have acted drunk. What about WC Fields? Dudley Moore? Foster Brooks?”

“And what about Eddie Murphy when he plays his drunken dad at a cookout? That’s 100% pure comedy.”

And to each his or her own. At Doozy, we think funny is in the eye of the beholder. But I couldn’t help but wonder whether as a society we require overly sanitized comedy for the sake of political correctness…and political correctness just isn’t that funny! Comedy should be on the edge. It should make us slightly uncomfortable at times.

Ultimately comedy serves as a form of relief for the pains and ills in life. (It’s a fine line between laughter and tears, after all.) And I do think it shouldn’t have to adhere to the same societal rules we usually live by day to day…when it does, it has a tendency to fall flat.

Here in the Doozy Cards World Humor Headquarters, funny is our daily bread. If you’re looking to make someone in your life smile, take a look at our wide selection of funny ecards. 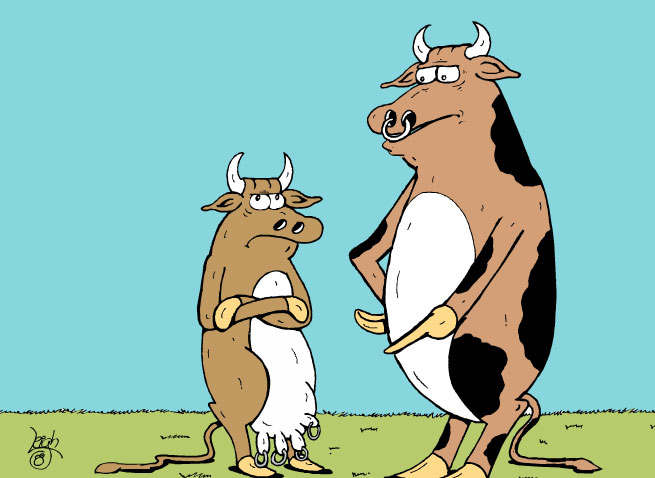 As the season for Holiday ecards winds down, with the last batch coming up being our Father’s Day ecards, and as the sun shines and warm breezes caress our brains, we get giddy… loopy even… and produce such tom foolery as you see below. We were on Facebook (as, we note, many of you are. Here’s our Doozy Cards Facebook page) when we saw the lovely poster for the upcoming move, Brave from Disney Pixar. Well.. being giddy, we couldn’t resist making a few alterations…. we hope you are giddy too and enjoy:

PS: MAKE YOUR OWN and either post it in comments or send it to us and we’ll post yours with ours. You can send them to, Support@doozycards.com 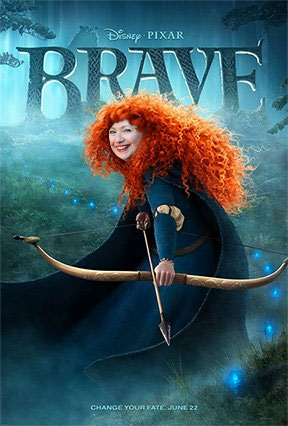 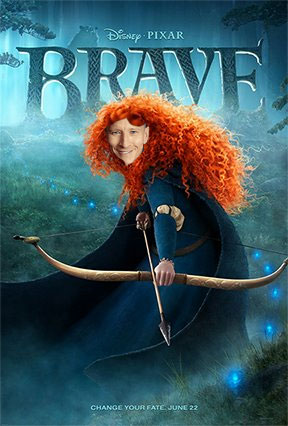 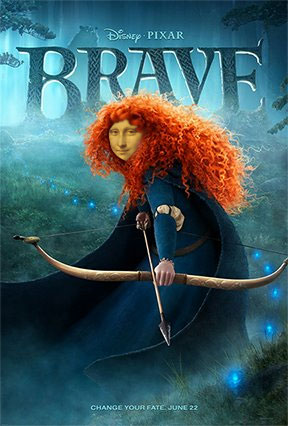