The anxious anticipation for Punxsutawney Phil and his shadow to make an appearance on Groundhog Day may seem like a recent phenomenon, but the tradition of predicting the arrival of spring are far older than that charming groundhog.

If you’re groggy on the details, here’s a refresher: If Phil, upon emerging from his burrow on February 2nd, is frightened by his shadow, we are expected to see six more weeks of winter. But if he doesn’t see his shadow because of a cloudy sky, we are in luck with an early spring. So, while you treat your friends and family to warm wishes of an early spring with the best Groundhog Day eCards like the Groundhog Day Tap Dance, we thought we’d share with you some historical fun facts about the holiday.

While the first official celebration of Groundhog Day as we know it took place on February 2, 1887 in Punxsutawney, Pennsylvania, German immigrants brought the basis of the tradition to the area around the 18th century. Known as Candlemas, a Christian feast commemorating the presentation of Jesus at the holy temple in Jerusalem, had been celebrated throughout Europe for centuries. 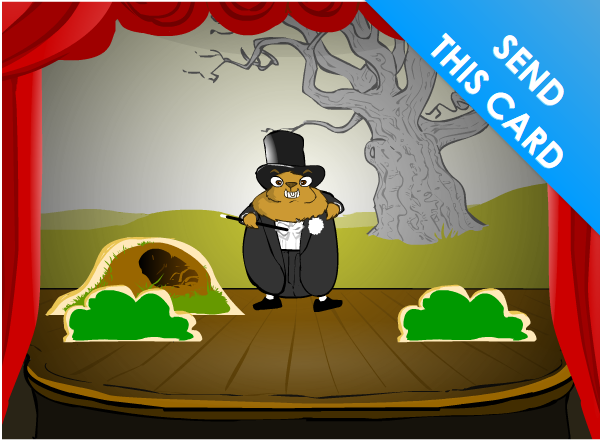 And while many Christians long believed that a sunny Candlemas meant 40 more days of cold and snow, Germans came to interpret the legend in their own way: a longer cold spell was predicted if badgers and other animals saw their shadow when emerging from their burrows. When Germans arrived in Pennsylvania, the legend was further adapted for the native groundhog (also known as a woodchuck!) to be the weather predictor, just as he is in Groundhog Scare.

It’s also believed that the festival of Candlemas is based upon a far more ancient, pagan celebration known as Imbolc. The Celts of what is now modern day Ireland, Scotland and Wales, would mark the arrival of spring with the festival of Imbolc, which involved its own form of weather divination: watching to see if serpents or badgers came from their winter dens. So, it’s not hard to imagine that a few other animals tried out for the part that Punxsutawney Phil eventually came to play, just like the critters in Groundhog Day Audition!