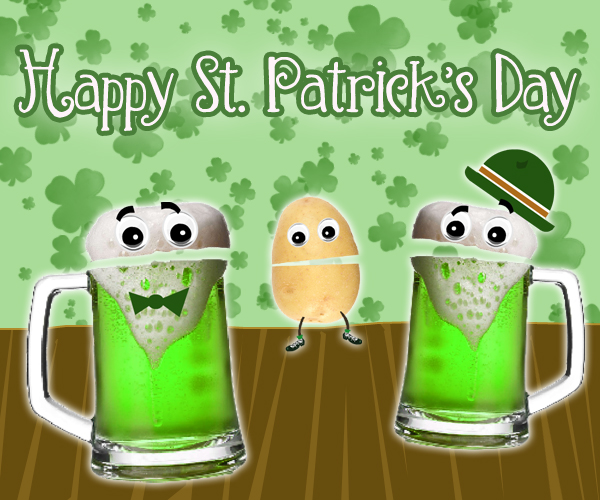 You may be familiar with the old tradition of donning some green apparel on St. Patrick’s Day or you’ll get a pinch from your friends! But there’s a lot you probably don’t know about this fun Irish holiday. Sure, you’ve heard plenty about shamrocks, mischievous little leprechauns and beautiful rainbows with pots of gold at the end, but this March 17th you can impress your friends with these 11 surprising facts about St. Patrick’s Day.

The color long associated with Saint Patrick is actually a shade of blue. So, I guess Saint Patrick himself would have received lots of pinches! The color green didn’t become a part of his holiday until the late 18th century when it was linked to the Irish independence movement at the time.

He may have become famous for introducing Christianity to Ireland in 432, but he was actually born in Roman Britain, either in modern day Scotland or Wales.

While many people associate pints of Guinness with the holiday, in Ireland the day was considered a strictly religious holiday, which meant that all pubs were closed. That law didn’t change until 1970!

4.     The St. Patrick’s Day parade was invented in America

Americans love a good parade! On March 17, 1762 Irish soldiers serving in the British army marched through the streets of New York to celebrate their Irish roots and connect with their families across the pond.

5.     The world’s shortest St. Patrick’s Day parade is in Dripsey, Cork in Ireland

The parade lasts just 100 feet and travels between the village’s two pubs.

6.     There’s a reason behind all of those shamrocks

It’s not just because they look pretty. Saint Patrick used the three-leafed plant as a metaphor for the Holy Trinity when he introduced Christianity to the Emerald Isle (aka Ireland).

Corned beef and cabbage, the traditional St. Patrick’s Day meal, doesn’t actually contain corn. Corn is an old term used to describe any small grain, in this case it’s the grains of salt used to cure the beef.

According to legend, Leprechaun’s earned those pots of gold they’re guarding. How did they do it? By spending their days making and mending shoes, which is hard work!

9.     Chicago dyes their river green for the holiday

If you ever visit the Windy City on St. Patrick’s Day, you’ll see that the Chicago River is dyed a bright green. The tradition started in 1962 when city workers were using a dye to test for illegal sewer discharge, and thought the color would be appropriate for the holiday. About 40 pounds of dye are used to turn the river green for a few hours during the city’s parade.

10.The cold might have helped keep snakes out of Ireland

Legend says that St. Patrick drove the snakes out of Ireland, but fossil records show that the island has never been home to any snakes. Through the Ice Age, Ireland was too cold for any reptiles and the surrounding seas have kept them out ever since. The snakes in St. Patrick’s legend are more likely metaphors.

11.There are no female leprechauns

Don’t be fooled by any St. Patrick’s Day decorations featuring lady leprechauns. In traditional Irish folk stories, there were no female leprechauns, only short and scrappy red-haired fellas.

What are you doing to celebrate St. Patrick’s Day? Heading to the parade, dressing all in green and eating lots of corned beef and cabbage? Or maybe you have another tradition? Let us know in the comment section and don’t forget to send a thoughtful and hilarious St. Patrick’s Day eCard to all of your lucky friends and family members.